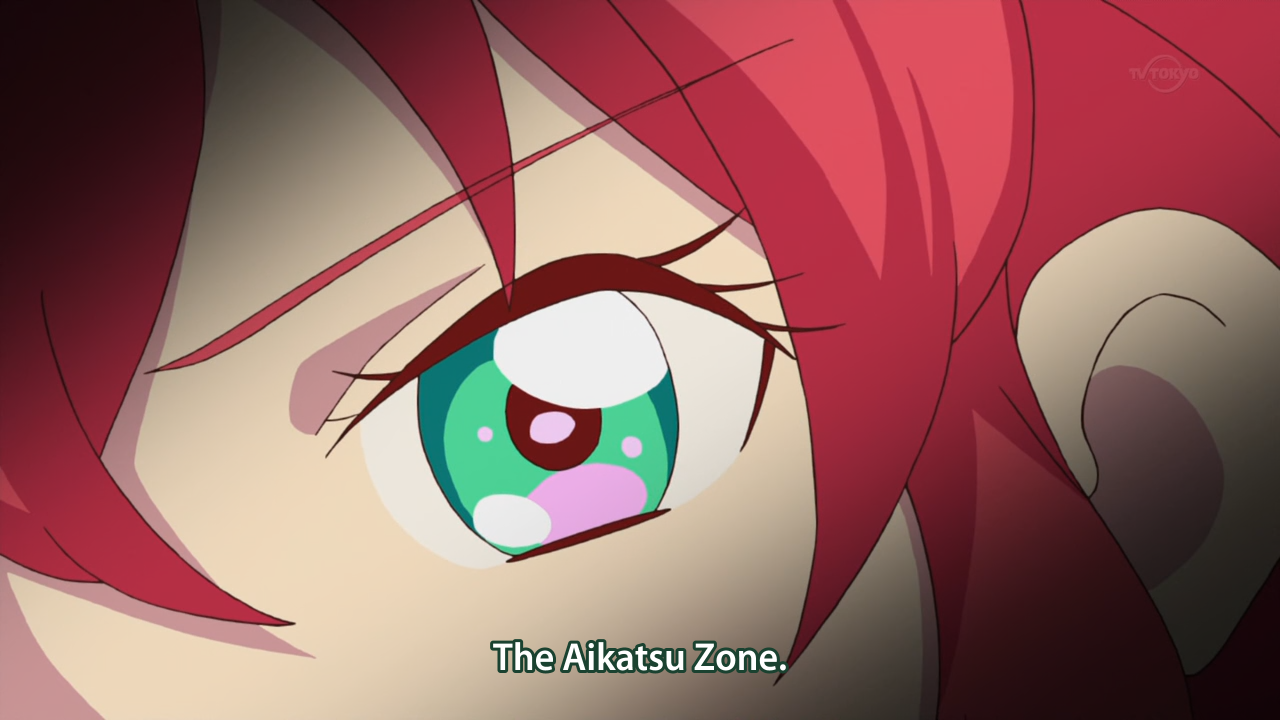 At the end of this week’s episode of Aikatsu Friends, something very strange happened. I was at first elated that Aikatsu would reference my area of neuro research, turning around and incorporating a part of my thesis topic instead of me simply trying to bring Aikatsu into my life’s work. But then I was double facepalming hard as the scary music played and everyone started freaking out about Mio entering the zone. Either you took it at face value and were excited/exasperated at this new and interesting development, or you were as confused as me as to how the writers messed up something so simple. Which is why I want to take it upon myself to talk a little bit about the zone and what it is in real life, both for beginners and intermediate viewers. I consider myself somewhat of an expert on the topic, and while you can probably just skim the wikipedia article on it, I’d like to present my take on it in the context of Aikatsu.

The “zone” is the commonly known name for the mental state known as “flow”, researched and popularized by an American-Hungarian scientist with a very long and hard to pronounce name. Flow is defined as “effortless attention, reduced self-awareness, and enjoyment that typically occurs during optimal task performance”. As Tamaki-san explained, it’s often used in the world of sports, but also finds widespread use in fields as varied as music, programming, and even translation. During flow, task performance (or idol performance, in this case) is at or near a peak. It feels good to be in a flow state, and you enter a feedback loop of focusing more to do better, and doing better because you’re focusing more.

How can I get into flow?

Flow occurs naturally when skill level and task difficulty are perfectly matched. Take a look at one of my favorite graphs below. 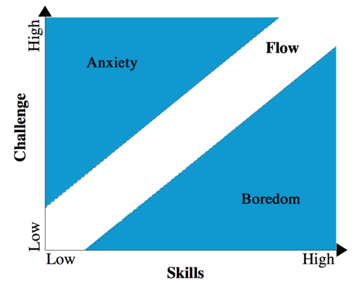 Flow can (but does not necessarily always) occur throughout the entire white diagonal area. You’ll notice that when skill level is higher than the challenge it can lead to boredom and disengagement from the task, whereas when the difficulty is too high it can lead to anxiety or distress. It’s also wider than just a single line, indicating that there’s some wiggle room between skill and challenge, and a small range of each that match up can induce flow. Studies have shown that on average, it takes 30 minutes of uninterrupted performance for a skilled practitioner to enter flow, and that any external disturbance can not simply reset this timer, but increase it depending on the lasting aftereffects of what happened. There’s also this long list of bullet points on what else you need, but you can read the wiki article yourself if you’re interested.

What are the downsides of it?

Contrary to Tamaki-san, Mirai, and Karen’s extremely horrified reactions, flow in real life has nearly no downsides. It feels good, it makes you better, and it improves the results of whatever you’re doing. In fact, a huge portion of my research is based on how we can more effectively lead people into a flow state to optimize learning complex tasks. If I had to guess what the big deal is, I’d say it may be related to some things normally considered beneficial. For instance, people in a flow state shut out their surroundings that are irrelevant to the performance at hand in order to concentrate more deeply on it. But in terms of physical or mental strain, there’s nothing. Flow doesn’t take more energy from your body, and it doesn’t leave you feeling drained mentally or emotionally. On the contrary, it can leave you feeling elated or satisfied and full of confidence, exactly what Mio demonstrated after her live. Hmm…

You got it, honeys. When performing any task (and we use this term very generally, meaning anything that requires attention and action, or some kind of response), you can also measure the associated cognitive workload. Workload has a few definitions, but here I mean it as a correlate of the limited information processing capacity of the brain, with the maximum cap related to each individual’s working memory. Given a specific task with a set challenge level, skill/expertise becomes the only independent variable. Check out the figure below. 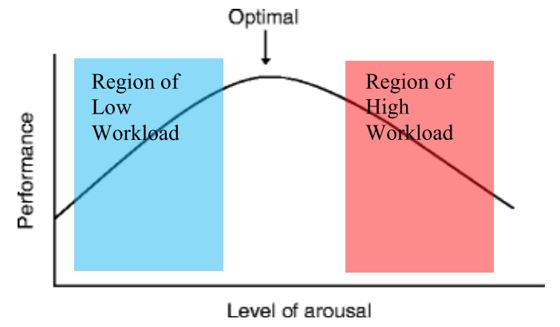 Performance is self-explanatory, but above just replace arousal with workload as in this case they’re equivalent. On this inverted U-shaped graph, the left side represents high skill level and the right is low skill level. And right in the middle, in the familiar white space from far above, is the area of flow activation. Therefore, when workload is at a Goldilocks level and performance is at its maximum, one can enter flow.

How do we make use of this information? First we need a way to measure cognitive workload. You can do this in several ways: direct performance measurements, secondary task performance, subjective surveys, or with neurophysiological measurements. It’s this last one that my lab is interested in. It encompasses things like heart rate and skin conductance, and also recordings of the brain using a variety of machines (my focus is on fNIRS, a topic far too complex for this post). This also allows for completely independent and objective measures of workload without interfering with the person doing the task. By analyzing workload and performance in real time, task difficulty can be adjusted to nudge a person into that sweet, sweet flow zone, thereby optimizing performance and making learning more efficient.

How will this affect Aikatsu?

We know that flow is good, so why is the Aikatsu Zone so dangerous? Let’s first look at the problem Mio let us in on at the beginning of this episode. She’s feeling inadequate because she feels like she isn’t changing like everyone else is. In other words, she’s not improving as quickly as them. But this is completely natural for someone who’s already as skilled as her. People learning a skill go through alternating periods of improvement and periods of stagnation. When you’re just starting out, these go back and forth very quickly, and it feels like you’re overcoming every obstacle in your way with little effort. Just look at how fast Aine got better at acting with Mirai or encouraged Chiharu-san to start her brand. Now compare that to the much higher amount of time and effort it took Honey Cat to boost their Friends Appeal to the next level. And don’t even get me started on Love Me Tear, who has shown no visible change at all yet. Mio just needs to understand that there’s nothing wrong with her, and she’ll improve as long as she keeps on ganbaru-ing.

Now what might happen because of Mio’s Aikatsu Zone? Let’s go back to one of the effects of being in the flow: increased self-confidence. Look at the language Mio used towards the end of the episode. “I feel like I can reach them. I feel like I can surpass Love Me tear.” It’s even apparent in the preview when she’s talking to Aine. “I’m on top of my game. Just leave it all to me.” She’s so focused on herself that she appears to be losing what makes Friends special in the first place. I can see only one of two outcomes happening in the Brilliant Friends Cup.

1) Pure Palette loses because Mio goes too far on her own, throwing their balance off.
2) Pure Palette wins, but entirely due to Mio’s efforts. None of the other competing Friends appreciate this, and Aine feels betrayed and useless.

This also stems from the flow state making you naturally shut out your surroundings, which when performing on stage could mean both the audience and the person singing and dancing right next to you.

So hopefully that was a good explanation for those of you unfamiliar with the concepts, and provided some insight about my views on it all and how it relates to Aikatsu. I write a whole thing for every single episode, but rarely do I share it here because I like seeing everyone’s unbiased opinions. It’s just that in this case, when it’s a concept so clearly tailored to me, I can’t keep my mouth shut. Don’t forget to keep in mind that nothing I said may be relevant at all, since this is a fictional world that doesn’t necessarily follow the rules of ours. I’m excited to see where they take this, and hope deeply that it’s not dropped in two or so episodes after the Brilliant Friends Cup, as this could be a really interesting and unique plot thread.

6 thoughts on “What happened at the end of episode 25?”