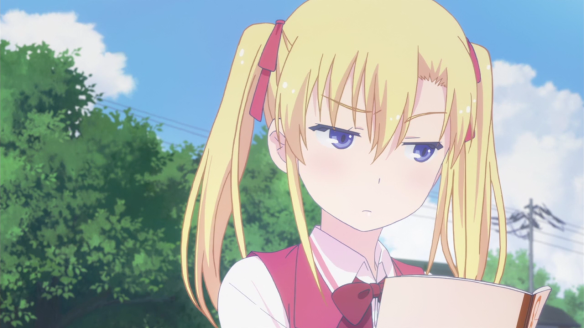 Even the worst character can get a blog screenshot…

Sigh, half of this episode’s dialogue made no sense because they cut out like, half the lines from the novel…

Also, in case you didn’t realize, here are the roots behind the names of the first three Be My Angels:

The first one, Ayanami Asuka, is Ayanami Rei + Asuka Langley from Evangelion. The seiyuu’s name is also formed from the name of the seiyuus for those two characters (Hayashibara Megumi + Miyamura Yuuko = Hayashibara Yuuko).

The third one is Daidouji Tomoyo + Kinomoto Sakura = Daidouji Sakura. The seiyuu is Iwao Junko + Tange Sakura = Iwao Sakura. (I didn’t have to look anything up for this one! I feel so … proud?)

I don’t think the fourth and fifth have other-media inspirations.